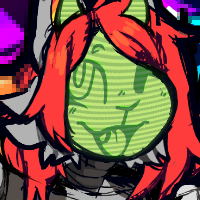 Kibibtye, Kibi for short, is one of the many Internet Residents, and possibly the weirdest of them all.

She's a type of android, coated in a synthetic fur material. Despite her 'fleshy' appearance, she does not have organs. She also cannot eat nor drink, partially due to her face being displayed on an LCD screen.

Her face panel allows her to show a wide variety of emotions, even having the ability to tell stories and jokes exclusively by using the panel.

Kibibyte has three sets of rainbow tendrils, they're prehensile and often appear to be aware of their surroundings.

Kibibyte's personality is equally super friendly and super mischievous, opting to do whatever feels most fun to her. She gives off that 2007 Scene Kid™ vibe, but is mostly harmless.

She absolutely can speak english, but prefers to use a combination of emojis and unicode symbols. Gets in internet fights at least three times a day, usually over something irrelevant.